Cost of Cloning a Pet

Report Highlights. The cost of cloning a pet has declined significantly to the point where it’s affordably within reach. Humans have bred animals for their desired traits since prehistory, but cloning is the only way to create a genetic “twin” of an exceptional sled-dog, a prize-winning show animal, or a beloved family pet. While cloning has its limitations, data trends indicate cloned pets could become a significant market in the pet industry.

*This includes fusing the donor DNA with an unfertilized egg, as well as the embryonic implantation into the surrogate mother.

The price of cloning a pet has decreased significantly since the process became commercially available in 2004. The procedure is still complex, with several costly steps along the path to a living clone. In addition to the delicate scientific processes, living donors and surrogates require care. The new clone will need the same vaccinations and healthcare that any other baby animal would receive. 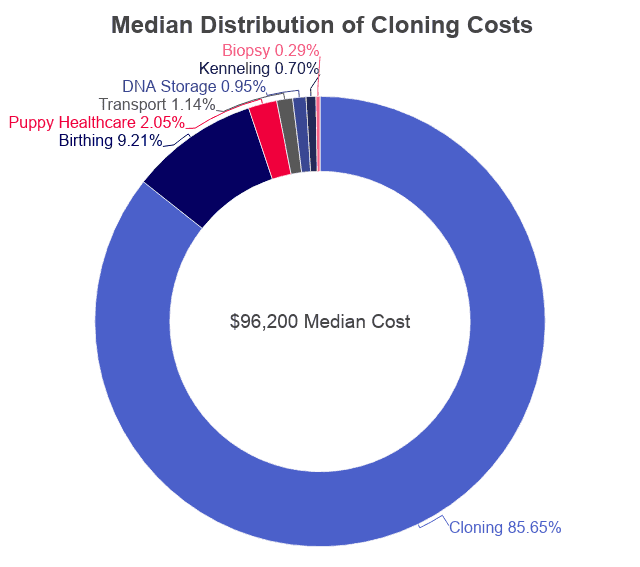 Multiple biotechnology companies offer pet cloning services. Though the existence of Dolly the sheep’s clone made worldwide headlines in 1997, commercial pet cloning was not available until the early 21st century. Prices dropping in recent years implies such services may become more commonplace.

Though cloning living organisms is a new process, it already has an extensive history, much of which remains unknown to the public. Scientists are generally tight-lipped about failed experiments for fear of losing funding, so details about the earliest attempts at artificial cloning are sparse.

Most people don’t learn about scientific breakthroughs until the news reaches mass media, so the general public’s knowledge of pet cloning mainly comes from stories of famous animals or celebrities who have cloned their pets. In fact, it is unlikely that Dolly the sheep was the first successfully cloned animal. Rather, she was the most widely publicized; the world’s first clone may have been a frog produced as early as 1952.

Some animals have more complicated reproductive systems. Not every species has been cloned with success, and even some of those that have would not be considered candidates for commercial cloning due to the difficulty or low success rate.

Criticism of the Pet Cloning Industry

Considering how much Americans love their pets, it would be natural to expect people to be intrigued by the idea of having a pet cloned. Only 13% of Americans surveyed, however, say they approve of commercial pet cloning. Critics have a list of complaints about commercial cloning and its industry, including the emotional and psychological costs of cloning pets.