Report highlights. Commercial dog breeding facilities or “puppy mills” are defined by overcrowding and unsanitary conditions. This is primarily due to the overwhelming number of illegal mills as well as licensed mills that fail to follow state and/or federal animal cruelty laws.

The true population of puppy mill dogs is unknown. Mill populations are in constant flux due to births, sales, deaths, etc. Additionally, the federal agency in charge of keeping those numbers – the U.S. Department of Agriculture (USDA) – stopped making them accessible to the public in 2017.

Most breeding dogs in mills are female. These dogs are often bred at much earlier ages than is recommended by veterinarians and animal specialists. This can lead to health problems in breeding dogs, some of which can be passed down through generations of their offspring.

Improper breeding practices can result in disorders and diseases that may be passed from one generation to the next. Some of these disorders are not immediately obvious; some may not make themselves known until the animal has reached a certain age, which is why people who purchase these animals may not realize right away that their puppy is ill.

In order to maximize profits, commercial breeders must produce a high number of dogs in a short period. This limits recovery time for breeding females. In some cases, dogs are bred as early and as often as physically possible to the detriment of their health and the health of their puppies; their puppies are more succeptible to diseases, including illness that can endanger people. Among the most common communicable diseases found in mills, more than a third are human communicable (in bold).

Note that there is no data regarding the number or nature of deaths in puppy mills, as commercial breeders are not required to report deaths of animals under their care. Any numbers regarding deaths in mills must be estimated and/or extrapolated based on available data. 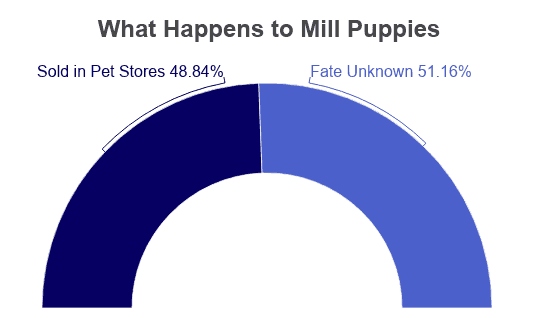 The path a puppy takes from birth in the mill to its final owner may be referred to as the “puppy pipeline.” From the mill the pipeline for most dogs includes the truck (transport), the brokerage and/or the pet shop. Investigations have uncovered abuse and neglect at many points in this pipelin, from improper transportation to unsanitary housing.

Terms used along the puppy pipeline can be confusing. Animal rights groups refer to this language as “doublespeak” and claim that it is deliberately designed to mislead pet owners.

How and Where Mill Puppies are Sold

Puppy mills’ biggest customers are not pet owners. Pet shops, chains, and superstores purchase dogs in mass amounts, often indiscriminately. Brokers make it more difficult for consumers to determine the origin of a puppy. Unhealthy dogs are such a problem in these stores that state and federal agencies warn consumers about purchasing from such stores, with some even passing laws to reduce instances of animal cruelty.

Watchdog groups report a steady increase in online brokerages – for which there are virtually no regulations – masquerading as legitimate breeders or even as animal shelters/rescues.

In order to operate legally, puppy mill owners are required to register with the Animal and Plant Health Inspection Service (APHIS) under the USDA. Most do not. While there is no one official definition of a puppy mill, a U.S. district court in defined puppy mills as “dog breeding operation[s] in which the health of the dogs is disregarded in order to maintain a low overhead and maximize profits.”

The AWA protects some animals at a federal level, but many states have additional regulations for puppy mills, pet stores, and/or supply lines. The AWA contains language that allows for states to make their own animal rights’ laws to fortify federal regulations. States with a poor track record of prosecuting animal rights violations tend to have a higher number of commercial breeders and brokers. 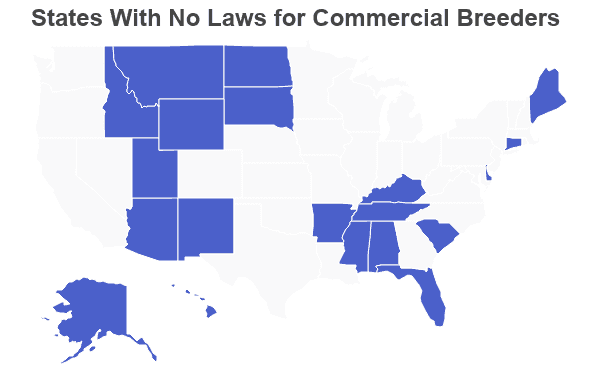 Contribution to Animal Homelessness and Death

Pet owners are just as likely to buy a puppy mill dog as they are to adopt from a shelter. Animal rights groups point out that if no one purchased their animals from mills, more pet owners would likely find a companion at an animal shelter or rescue. Additionally, animals that don’t find permanent homes face euthanasia.

To report an unlicensed puppy mill, animal abuse, or other violation of the AWA, please immediately contact APHIS at the USDA, local authorities and/or animal welfare nonprofits.