A great option for interactive play (but not chew sessions), the Tuffy series is great for dogs who like to throw a toy around with their owners, play catch, or just carry around something soft in their mouth. Our favorites are listed below:

Read on for our hands and jaws-on experience with a Tuff-Scale Level 9 Ring.

Choose a charity on then purchase
via links on this page to donate a portion
of your purchase. Learn more »
The Tuffy Ring
$0
on amazon
Shop now
8/10
Our Review

I’ve given up on a plush or “soft” toy that can defy our dog’s jaws during chew time. But I’ve always held out hope there would be a soft toy that we could engage her with, because catching hard toys like a frisbee or other hard toy is hard on an older dog’s jaws. I have personally seen a dog lose a couple teeth trying to catch a hard toy mid-air. It was not pretty.

For me, the ideal soft interactive toy for my girl would have at least a fighting chance of surviving long enough for me to take it away from her before she sat down to disembowel it. She loves her toys very, very much.

If your dog is like mine, she’ll sneak off after playtime to resolve unfinished business, especially if there is a squeaker in that toy. And by the time I realize the toy has gone with her, she’s suddenly become very quiet. And just like that, another sad little toy will meet its untimely end, its unheard cries harmonizing with the ones coming from my wallet.

Enter the Tuffy Dog Toy. Due to the tough circumstances it would be used in, I decided ton the Tuffy Ring, which is on the Tuff-Scale level of 9. By Tuffy’s standards, this is considered Extremely Strong and Extremely Durable. When compared to the other end of the scale, which included “usual cheap squeaking rubber toy” and “fragile miniature Teacup Chihuahua strong” I knew its designers had been in our shoes. 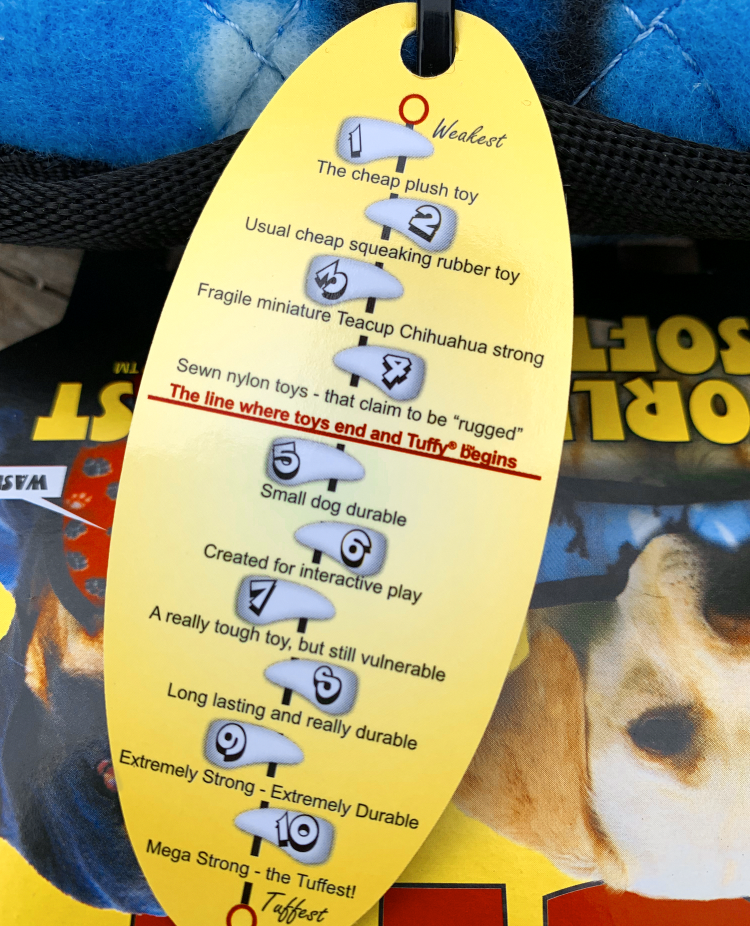 The Tuffy Ring is sewn with multiple layers of fabric- the outside is soft fleece, the second layer is “luggage material,” and then plastic coating over the center. Multiple seams hold them together with a lot of stitching. These can be washed, and they float. I didn’t get the chance to test how well they float when saturated with water because I couldn’t get our dog to give it up. 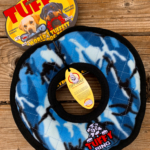 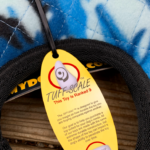 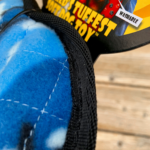 Multiple squeakers are sewn tightly into this toy into specially reinforced pockets giving you a few extra seconds to get them out if the dog manages to shred the toy. As much as our dog loves the sound,  squeakers are an omen of certain death in our household, and for others like us, Tuffy also makes these without squeakers.

Tossing the Tuffy Ring was fun, and I didn’t feel as concerned about her teeth when my dog caught it in midair and she easily got a grip on it. However, it got dirty fairly quickly outside. She carried it around inside for about an hour before settling down at her secondary job as a soft toy executioner. The seams around the edge are sewn on pretty well, but can quickly get torn off if you leave a dog alone with it. I only gave her about 30 minutes, frequently discouraging her destructive behavior, but she’d already worked her way into the seams before it was put away. Even so, I think we’ll get a few more months out of this toy as long as we keep her from sitting down to gnaw on it.

Remember, these are not meant to be left with dogs for an all-out chewing session, that’s what harder toys are meant for. These will get ripped open by a power-chewer. So just use it for the time you spend playing with your dog, or if you have multiple dogs that like to play tug together. It’s great for that. But inevitably they will start to get curious about those edges, and well, you can guess the rest.