Outward Hound’s Firehose toys come in lots of different shapes, colors, and sizes. Great for interactive play, our power-chewing canine review team demonstrated these are not intended to be used as chew toys. Read on for our review (and dissection!) of one of the Outward Hound Fire Hose toys.

Choose a charity on then purchase
via links on this page to donate a portion
of your purchase. Learn more »
Outward Hound Fire Hose Durable Tough Dog
$0
on amazon
Shop now
6/10
Our Review

Outward Hound’s firehose toys are made of tough material and look pretty rugged, with squeakers sewn in for added appeal. We chose Outward Hound’s  Fire Biterz lizard toy for this review. 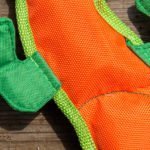 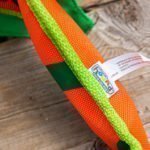 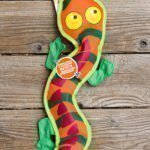 Our dog goes bonkers with anything that has squeakers in it, and the Fire Biterz did not disappoint, there are a total of 5 squeakers in it with different pitches, so you can really get the excitement going. We like to squeak multiple segments at the same time. Even the neighbor’s dog on the other side of our fence lost his mind wanting a piece of this toy! Some of the other varieties may have fewer squeakers in them. The squeakers supposedly keep squeaking even if punctured and if a few small holes are made in them, yes, they keep going but once they’re perforated by a bigger hole or more than 3, they’re done. By that point, you should already have taken the toy away.

The anatomy of one of these toys looks like this: 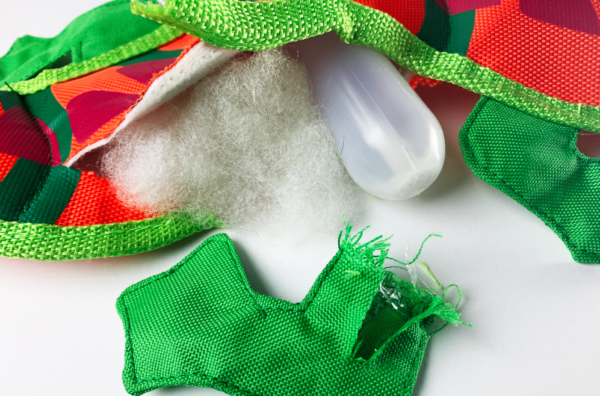 The body of the toy is sewn with from “ballistic” firehose type material, which is made stiffer with a layer of fusible interfacing on the inside. The edges are finished with webbing. The lizard’s legs are only attached with a single line of stitching as shown, and they were the first thing to get torn off. The legs have a layer of mylar inside, so they have a crinkly sound. The lizard is sewn into five sections or compartments, and each one has polyester stuffing and a squeaker in it. It doesn’t appear that they used more than one or two rows of stitching at the most to piece the whole thing together.

Too much polyester stuffing can wreak havoc on a dog’s intestines and even worse, does not show up well on x-rays if a dog has eaten a lot of it. So we’d definitely advise against letting your dog chew this one to bits as it would only take moments for him to gag it down. The squeakers could also pose a serious choking hazard as they are essentially round little plastic bottles with a squeaker in one end.

Overall for a good tug and toss toy, the firehose toys are an awesome choice, but they should be put away after play and discarded once they start coming apart.