Benefits of CBD for Dogs

For centuries, the cannabis plant has been used by humans for industrial, medicinal, and recreational use. Hemp fibers are found in everything from rope to clothing. In humans, cannabis-derived compounds have been found to help treat pain, epilepsy, Parkinson’s disease, arthritis, and many other disorders. 43% of human CBD users indicate they utilize these products to treat their conditions instead of a pharmaceutical drug regimen.

The benefits of alternative and holistic treatments for both humans and pets are often considered empiric or unproven, yet there are surging numbers of pet owners who report significant improvement for pets whose medical conditions were not resolved or improved with other treatments.

Some of the most common conditions and illnesses dog owners are treating with CBD include:

Nearly a third of pet parents indicated in 2019 that they prefer alternatives to traditional veterinarian medicine. While studies have shown that CBD isn’t necessarily harmful for dogs, the research on long-term effects and actual medical benefits is still in very early stages. In the past, challenges such as government regulation, confusion between CBD and marijuana have hampered efforts to conduct more studies that might move the usage of CBD in dogs past the anecdotal phase.

Even so, pet owners anxious seeking a holistic approach to improving the quality of life for their dogs have begun using CBD pet products in growing numbers. The CBD for pets business is one of the fastest-growing segments of the cannabis industry. Since the 2018 Farm Bill passed making hemp-derived CBD legal in all 50 states, the market for pet CBD products has exploded, expecting to reach $523 million in the last quarter of 2020.

For many pet parents, the benefits of CBD outweighs the stigma, risk, and the guesswork in how to make it work for their pups. The numbers are growing. As more clinical data and scientific studies are released on usage in dogs, it is projected by some to become as common as widely accepted as joint care supplements in the coming years. Veterinarians are increasingly becoming comfortable discussing CBD usage with pet parents.

Even as success stories and testimonials proliferate, it is an unregulated industry with no standards. There are many companies selling products found to have far less or far more CBD than listed on their bottles, and some touting “cannabis” products with no CBD or even hemp ingredients at all. We know that some compounds derived from the cannabis plant are very toxic to dogs. So where to start?

There are many ethical companies in the cannabis industry committed to transparency.  Their products are specifically formulated for pets. They regularly utilize independent testing to verify that what’s on the label is what’s in the product.  We’ve compiled some of our favorites here.

You might be thinking- “Wait a minute. This might work on people but I don’t want to give my dog pot and I don’t want him to get high.”

CBD is Not Marijuana

Cannabis is a genus within the plant family Cannabaceae. CBD is derived from cannabis plants cultivated as hemp. Cannabis can also be cultivated as marijuana, or “pot,” but it does not contain the psychotropic compounds that your hippie neighbor can’t get enough of. Hemp describes non-psychoactive cannabis sativa plants that are grown for industrial and agricultural use. Hemp is used in everything from textiles to industrial application. These plants have a much higher CBD content, and trace amounts of THC. Hemp is what CBD is derived from. CBD, or cannabidiol, is extracted from hemp in several ways, with CO2 and alcohol extraction being considered the safest means of processing.

Marijuana describes cannabis sativa plants that are grown and cultivated differently than hemp in order to yield high levels of tetrahydrocannabinol (THC). Cannabis-derived products that contain more than 0.3% THC in them are considered marijuana and should not be given to your dog.

How CBD Works For Your Dog:

While humans and dogs are vastly different in many ways, we do share similarities. One of those is the body’s endocannabinoid system (ECS), a regulatory system that links the brain to major organs and the immune and nervous systems. It helps to maintain homeostasis, or stability and balance between the systems in the body. Included in the ECS are receptors. When an imbalance is detected within the body, the ECS will release endocannabinoids, which are like a messenger that binds itself to a specific receptor in the body, triggering a response or function to correct the imbalance. 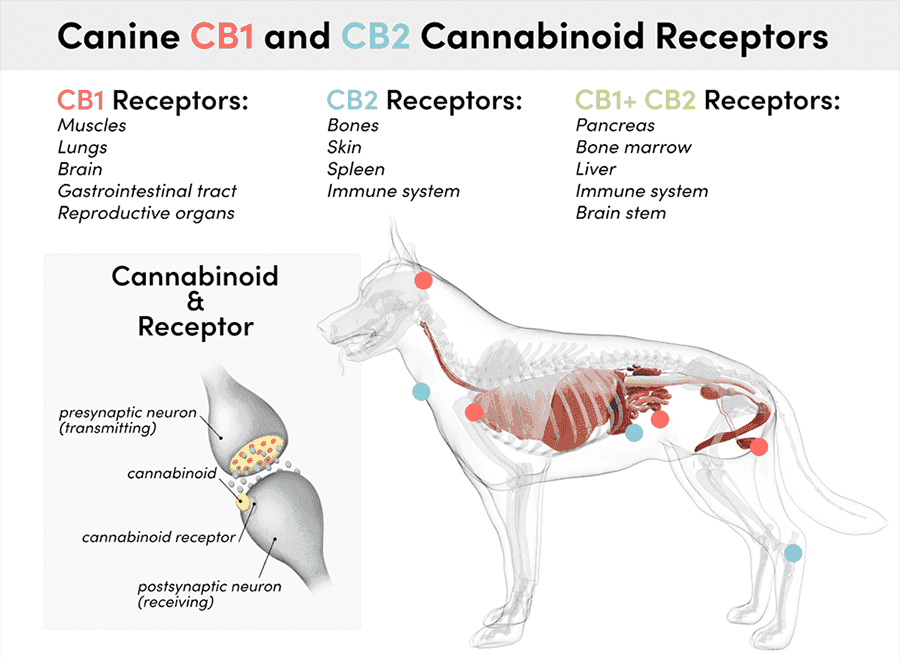 It has been found that a deficiency in endogenous cannabinoids (those produced by the body) plays a role in various disorders and illnesses in both humans and dogs. Receptors will only interact with specific compounds, similar to a lock and key.

Compounds whose chemical structure either mimics the endocannabinoids produced by the body can be found in cannabis sativa plants. These are called phytocannabinoids. And then there are synthetic cannabinoids, which are typically dangerous man-made compounds.

Non-endogenous compounds are considered to have an “affinity” for receptors in the body rather than being a perfect fit. They can still interact with the receptors.

Compounds derived from the cannabis plants are considered psychotropic or non-psychotropic.

Of the hundreds of unique compounds in cannabis, the major cannabinoids are cannabidiol (CBD) and delta-9-tetrahydrocannabinol (THC).

For dogs, CBD shows promise due to its non-psychotropic properties and how well it is tolerated. CBD is the compound that does not “get your dog high.”  In large doses, it is more likely to make humans and dogs sleepy than high. In the ECS system, CBD influences the various receptors in the body in ways we still do not fully understand, but this compound may help dogs in the way it helps humans. The FDA has already approved a CBD product for humans in treating a rare form of epilepsy.

Due to its psychotropic effect, THC has long been the most prominently-figured compound derived from the cannabis plant, but it’s toxic to dogs. When consumed by humans, THC binds itself to receptors in the brain and induces an altered mental state, or “high.” Products derived from cannabis plants containing more than 0.3% of THC are considered marijuana. While many humans enjoy it and it has become legal in many states, marijuana toxicity is a real thing and your dog can become very sick. Don’t give him your edibles or products not specifically meant for dogs.

Additionally, synthetic cannabinoids, such as the various substances sold as marijuana substitutes/street drugs are not a source of CBD or anything beneficial for your dog! Often referred to as “spice,” these contain compounds that can attach to receptors in the brain with potentially fatal consequences for humans, who end up on emergency room gurneys by the hundreds every year after taking these compounds. Never, ever consider giving these to your dog.

Some of the most common ailments in dogs are addressed by their owners using CBD products. Always talk to your veterinarian before considering CBD for your dog, especially if he is on any kind of medication or supplement. CBD can affect how other substances behave and are metabolized in the body. Remember too that other than some very limited studies, the benefits for dogs are anecdotal. Use of CBD products should never take the place of a visit to your veterinarian if your dog becomes ill. They may help mitigate related symptoms, but they do not cure cancer.

Every day that you walk out the door to go to work, leaving him alone. Fireworks that seem like mortars to his sensitive ears. The soul-snatching mailman who in spite of your dog’s hysterics, keeps coming back, day after day. The vet’s office. A dog’s life can be stressful at times. Long-term disorders related to anxiety can adversely affect both you and your dog. His quality of life can be affected in situations that might seem silly to you but are high-stress to him. We don’t always know what triggers anxiety in dogs, and some situations (such as leaving the home) cannot be avoided. Some doctors prescribe antidepressants for dogs. Other holistic approaches include aromatherapy, natural therapies, and the use of CBD oil.

Common symptoms of anxiety include:

CBD has the potential to alter a dog’s mood and help him mellow out. Going into and recovering from traumatic or stressful situations like veterinarian visits, medical procedures and grooming appointments may be made easier for a dog with the use of CBD.

Sometimes hand-in-hand with anxiety is a dog who is always worked up during times of stress, jumping on people, nipping, or in the case of a rescue dog we had many years, launching himself over the back of the sofa and ripping around the home. Some breeds are just little furballs of energy and this kind of behavior isn’t too far out of the ordinary.

However, some dogs just can’t calm down and their behavior can become more than a nuisance. This level of hyperactivity often stems from lack of exercise but also from anxiety. In humans, research has shown that CBD can help treat anxiety. It is likely that the effect of CBD on hyperactive dogs works in a similar manner as humans who find it calming.

Just as in humans, some pain medications for dogs don’t always seem to work or the side effects make it difficult to judge if the overall benefit is worth it. Dogs who suddenly don’t want to eat, are nervous, submissive, or show compulsive behaviors like chewing on themselves may be in pain. Cornell University’s pharmacokinetics study on dogs and cannabinoids found that CBD use among dogs with osteoarthritis resulted in increased activity and decreased pain.  This was achieved with using 2mg of CBD per kg of the dog’s weight twice a day. Research has shown that cannabinoids have anti-inflammatory properties

Colorado State University’s 2017 study on short-term effect of CBD treating seizures in dogs showed a lot of promise in reducing the frequency of these episodes. 89% of the dogs in the clinical trial showed a reduction in the frequency that decreased with a lower concentration of CBD in the dog’s bloodstream. Other studies have shown similar benefits in dogs suffering from epilepsy or injuries causing seizures. In fact, the FDA approved for humans a form of CBD known as Epidolex for certain forms of epilepsy.

These are just a few of the common reasons why pet parents might use CBD for their dogs.  Until the research can catch up to the CBD industry, it is best for dog owners to exercise caution as well as common sense- and most importantly-always speak to a veterinarian about CBD for a family pet.

For more information on CBD for dogs, we have a complete guide to help you decide if CBD is right for your dog or not. 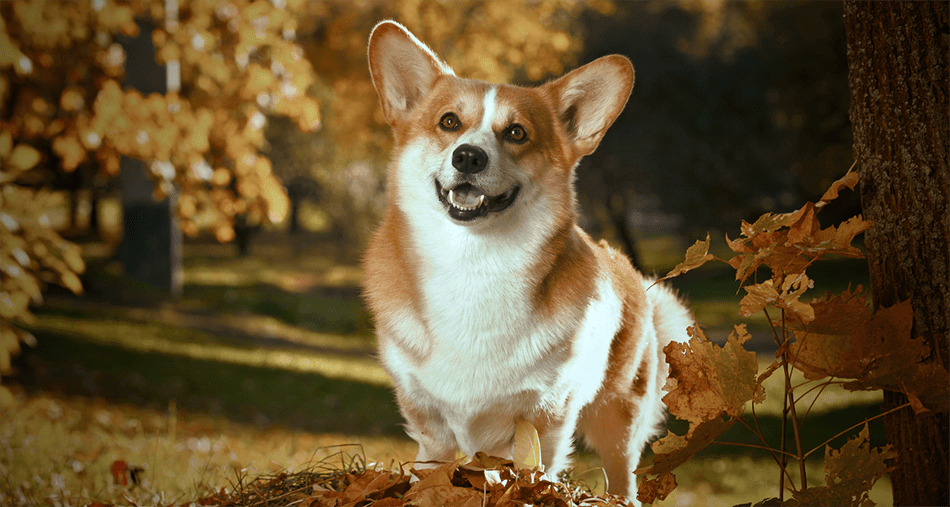 The information supplied here about CBD for dogs is meant to serve as a guide only. We encourage our readers to be cognizant of misleading and unproven claims. CBD oil should never replace timely medical care for your dog. The FDA recognizes potential possibilities in the use of CBD, but has not approved it for use in animals. Many claim that CBD oil can cure cancer, diabetes, and Alzheimers. While it is known that CBD oil can help address anxiety, insomnia and pain in humans, and the research for dogs looks promising, the research to understand what the side effects are is still in very early stages. There is even less research for long-term effects on dogs.